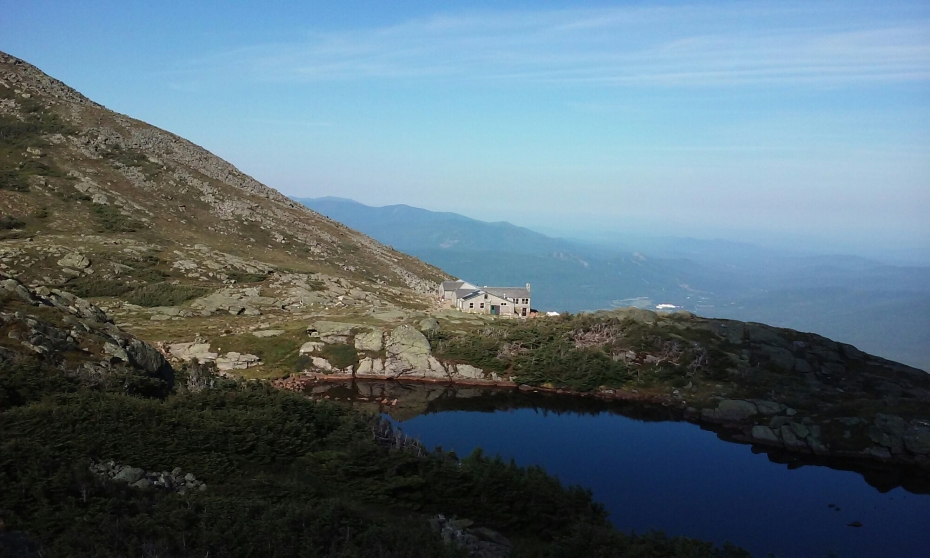 Photo taken looking back at the Lakes of the Clouds Hut from the slope of Mt. Washington.

I had a bunk! I woke up as early as usual, before the official wake up at 6:30 by the crew making lotsa noise. 🙂 Coffee was the first priority of the day. Breakfast was served at 7am. Oatmeal was first, with a good variety of toppings, including chocolate chips. Mmmm

And then came BACON! Coffee cake, more coffee, scrambled eggs, it was a good hearty breakfast and a great start to the day. baconbaconbaconbacon Because Mt. Washington was waiting… At every hut, at 7:15, the crew reads the official weather statement for the day, radioed down from the Mt. Washington Weather Observatory. At the LotC hut, if the weather up top is bad, they won’t let the guests hike up. But all systems go on this day.

I really enjoyed the climb to the summit, 1000 feet up. It was all rock, but large, fixed in place boulders, and I was going up, not down. It was a completely beautiful morning, sunny, low winds – I passed one of those signs warning that the area ahead has the worst weather in America and to turn back NOW if the weather is bad. That did not apply today! I made the summit by 10 am; I was not hurrying.

I dawdled up at the top while the phone charged. I bought, filled out, and mailed a post card; I bought and consumed a diet Coke and chicken tortilla soup; I wandered through the museum. I was not inclined to stand in the very long line waiting for pictures at the summit sign. You will just have to take my word for it that I was there. 🙂

I hung around until noon, with the phone at 75% charge instead of 6%. Good enough! Mountains waited. And finding the right path down the mountain was a bit confusing; but I managed to follow the right set of cairns to get on the Gulfside path. Which, incidentally crossed and then paralleled the cog railway for a while. No, I did not moon the passengers, but the thought was in my mind.

Coming around the side of Mt. Clay, an unpleasant reality sank in… Above treeline, when nature calls, there are very few places to take the call in private. Everything and everywhere is exposed to view. Eventually, the trail wound up into a rocky enough area, though, and just in the nick of time.

Rock, rock, rock. Boulders. Uneven footing, baking sun, no shade, little wind, for a while. I stopped to apply sunscreen, but could still feel myself drying up. Luckily, clouds came in and it cooled off before it got too bad. I kept on hiking, the trail wound around the side of Jefferson instead of up to the summit. But it was high enough up that the descent was steep, and of course, rocky.

And that’s where I took a misstep, and could not recover my balance with the poles, though I tried. I ended up lying head downslope on the rocks, the breath knocked out of me, and badly shaken. Assessing my injuries two days after the fact, I came off surprisingly well, for the type of tumble I took. A slightly twisted right knee, a sizeably bruised and sore right forearm, and a cut on the forehead. I groped for my poles, shakily hauled myself upward, and continued on, albeit much more slowly.

It was at this point that the Madison Hut became my fixed destination, instead of the campgrounds I was aiming for. But between Jefferson and the hut, Mt. Adams waited. Fortunately, just at the point my spirits and energy were lowest, I caught up with a small group of three other hikers. Somehow, as the tail-end of this group, I drew energy from them, to get up the steep, rocky side of Mt. Adams pretty quickly; again, I did not have to summit it. But at the point of descent, there was still a mile to go, and both knees were complaining, the right more than the left.

I swallowed some Advil, and just kept following the cairns downward, very carefully. The rocks were sharp, and you could tell the ones people usually used, because they had more green moss spots than the other rocks. It was a major relief when the hut came into view, but it was still a half mile away.

I wobbled into Madison Hut about 7 pm, while guests were inside having dinner. My first request was for an ice pack, and my second for work for stay. Both were granted, to my great relief.

However… Never underestimate human kindness. My Cincinnati group from Lakes of the Clouds was at Madison, and one of them was gone… So they offered me his place, which was already paid for. I will be sure to send a thank you! So in an instant, I went from volunteer helper to honored guest, and the crew quickly rustled up some soup, bread, salad and chicken for me. Truth to tell, I was still pretty shaken up and my stomach was jumpy. I was not all that hungry, but I was so grateful I would not have to sleep in the floor that night. I retired to my bunk pretty quick, took more advil, and slept fitfully. The wind started howling about 2 am.

I hiked on. Okay, limped.